In America today, the road to abundance is paved with rotting fruit. At least, that is a cringeworthy example of some of the most frivolous excesses of our waste-based lifestyle. This will not come as a shock to anyone who has ever stepped foot in a Ruby Tuesday “salad” buffet, but Americans waste an average of 30-40 percent of our food supply every year, or roughly 80 billion pounds. 43% of that waste comes from private households. At the same time, roughly 35-50 million Americans, including at least ten million children, are estimated to be food insecure, lacking a reliable meal source.

While you should get on cooking that two-week-old asparagus in your bottom shelf right after finishing this article, the most tangible target for policymakers comes from production and distribution. This represents the combined 57% of food waste in America that does not come from private households. On my recent study abroad trip, I was strolling through a French supermarket called Auchan Supermarché. I recalled once reading about laws in France that prohibit grocery stores from wasting food, which was comforting to know as I perused the aisles. Upon further research, I discovered that, while French food waste law is complicated, it is miles ahead of where we are in the United States.

The first major law in 2016 mandated that supermarkets larger than 400 square meters, (~4300 square feet), must establish a relationship with a charity organization to donate their unsold food. Simultaneously, they prohibited retailers from destroying food that was still “fit for consumption” and mandated that unsold food be handled in accordance with a hierarchy. Thus, the store must first discount the product and inform customers of how their purchases can help prevent waste. After that, food that is still unsold must be donated to charity, then used as animal feed, then composted or used for anaerobic digestion (production of biofuels). If those options are exhausted and still impractical, only then is disposal in the trash permitted.

France added to these laws in 2019 and 2020. They required commercial catering operations that produce over 3000 meals a day to follow the waste prevention regulations. They also required caterers at this scale to offer a doggy-bag option, encouraging clients to take all leftovers home. Some purveyors were mandated to publicly display their waste reduction efforts. Finally, the amendments strengthened fines for destroying unsold food and compelled donated products to be shipped out no less than 48 hours before their expiration date. Misunderstanding of “best before” and “use by” dates by consumers contributes massively to food waste and is a reason that dairy is the most common food group to end up in American landfills. 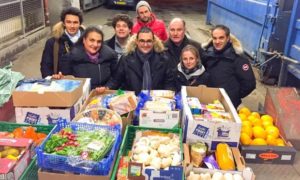 The French laws have not been a panacea for obliterating food waste. As critics note, they do not require a minimum proportion of excess food be donated and do not mandate how frequently the donations must be made. Furthermore, food banks often do not have adequate storage or distribution infrastructure to handle a large influx, meaning they must throw out food too, especially perishable goods. Nevertheless, the laws have encouraged conservation among French grocers, as over 90 percent of French supermarkets donated unsold food in 2018, compared to just 66 percent in 2016. A new industry has cropped up in France of grocery consultants who match stores with charities and recover their food for them, proving especially useful to rural grocers who may be farther from receiving communities.

Overcoming Western stigmas around food aesthetics requires innovative branding tactics. French grocer Intermarché did this by planting an “inglorious fruits and vegetables” section in their stores. Since 2014, they have bought the produce that growers toss aside for not meeting industry beauty standards and sold it to customers at a 30 percent discount. Employing humor, they leaned into the stigma and referred to fruits as “the grotesque apple” or “the unfortunate clementine.” The campaign was a gleaming success, boosting store traffic by 24 percent in one month.

The status quo is driving climate chaos as 11 percent of global greenhouse gas emissions come from food waste. 30 percent of food in American grocery stores is thrown out and the restaurant industry loses $162 billion annually to lost food. The case for these changes makes business sense across the supply chain. France wastes 18% of their food, whereas we waste double that proportion. We should emulate the culinary icons across the pond and implement similar legislation in the United States to curb food waste.

This article was written by Sam Berens, as an Op-Ed for his UF European sustainability study abroad program.  The Gainesville Sun picked it up and published it on August 7th, 2022.   He recently graduated from University of Florida with a major in Political Science and International studies, and a minor in urban and regional planning.